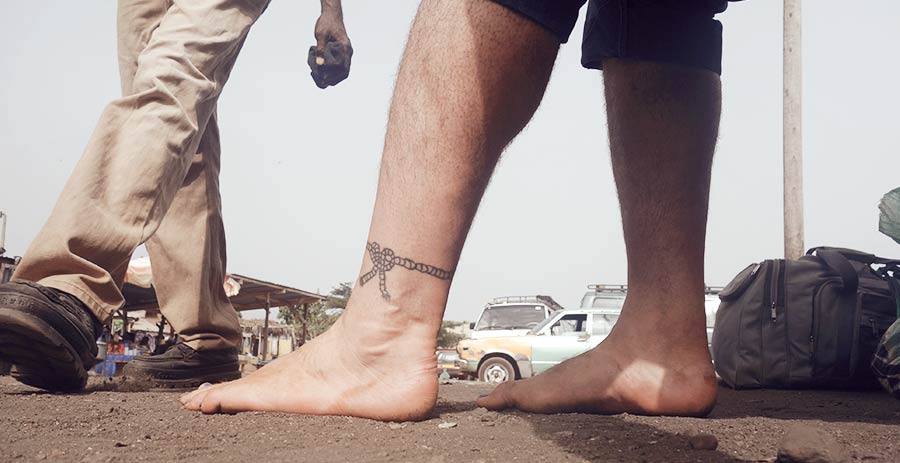 I’m not sure what the locals thought when they saw a tall hairy white man running barefoot from the border in the morning sun, with no luggage, clutching his chest pocket to ensure his passport didn’t fall out – asylum seeker or drug dealer maybe.

Truth was, I’d managed to lose my shared-taxi. I was traveling from Benin to Togo, and being a ‘foreigner’, I’d had to be stamped in/out of both countries, rather than doing as the locals do & showing ‘ID’ in the form of small-value local currency. I’d left my luggage in the taxi & jumped out at the Beninese post – but by the time I’d been processed, got my Togo visa, and crossed over, the taxi had disappeared.

I wasn’t too worried at first – I hadn’t paid him yet – but it meant I had nothing on me other than a shirt, trousers, my passport, and a small amount of money; even my sandals were in my backpack. After waiting for 15min, the border officials suggested that my taxi might be waiting at the car park some 200m up the road. Turns out, it wasn’t.

I found my favorite Café in Barcelona – thanks to a book!

Several thoughts crossed my mind; I’d lost pretty much everything – tablet, phone, clothes, power leads, debit card – & figured I’d have to go to the British Embassy in Lomé to plead my case, then realized there wasn’t one. Was I going to be stuck in a country I was only visiting because it was ‘in the way’?

Luckily, within fifteen minutes my taxi returned – he’d been waiting for me to get through immigration, got bored, & dropped off his other passenger before coming back to find me. Crisis narrowly averted, I headed on towards Lomé.